Jeffery "Jeff" Murdock is one of the main characters of Coupling. He was portrayed by Richard Coyle until Coyle left at the end of season 3.

Jeff works in the financial department of the same company as Susan Walker. At some point in the past Jeff and Susan went on a date, which ended with Jeff having a panic attack when Susan got undressed.

When Susan and Steve go on their first date Jeff tags along so to monitor their conversation and try to prevent the story of his date with Susan being discussed. After Susan's and Steve's date turns into a group meeting, Jeff takes seriously Susan's offer to show them a breast to get the rest of them to leave. Despite Susan's initial reluctance when the rest of the group side with Jeff and want to see Susan's breast. In the end, Jeff gets his wish. ("Flushed")

Jeff is awkward around women. His nerves get the better of him around attractive women and he speaks without thinking about what he is saying, which leads him to saying inappropriate or simply strange things. Because of this he is not particularly successful with the opposite sex.

Jeffisms are quirky, silly phrases coined by Jeff. Each phrase has a definition attached to them and he brings them up whenever a situation fits. Though this is not always the case, as one can catch Jeff spouting Jeffisms at the oddest places and times. Most of them are related to sex and its derivatives. Most of the characters ignore them and see them as a part of Jeff's unique personality.

Below are a few Jeffisms over the course of his appearance in 3 Seasons.

Writer and Creator Steven Moffat gave a closure to the lives of the characters:

Jeff is still abroad. He lives a life of complete peace and serenity now, having taken the precaution of not learning a word of the local language and therefore protecting himself from the consequences of his own special brand of communication. If any English speakers turn up, he pretends he only speaks Hebrew. He is, at this very moment, staring out to sea, and sighing happily every thirty-eight seconds.

What he doesn't know, of course, is that even now a beautiful Israeli girl he once met in a bar, is heading towards his apartment, having been directed to the only Hebrew speaker on the island. What he also doesn't know is that she is being driven by a young ex-pat English woman, who is still grieving the loss of a charming, one-legged Welshman she once met on a train. And he cannot possible suspect that (owing to a laundry mix-up, and a stag party the previous night in the same block) he is wearing heat-dissolving trunks.

As the doorbell rings, it is best that we draw a veil. 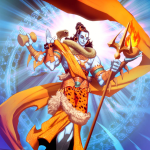